12 ways to get creative with your Raspberry Pi

Created by a team at the University of Cambridge Computer Laboratory with the goal of offering a tiny and cheap computer for kids, from the moment the Raspberry Pi first became available in March 2012 people have been coming up with some very creative ways in which they can use the technology!

Take a look at some of our favourites – then tell us how you're using yours.

Photographer David Hunt will never again suffer from a corrupted memory or missing SD card. By combining a DSLR camera with the Raspberry Pi David is now able to automatically sync his photos via Wi-Fi to his home computer, which then syncs those with an iPad for further backup.

We thought this project was particularly sweet. Micha’s grandmother-in-law turned 90 last year and he wanted to give her something extra special to celebrate. Being visually impaired she was unable to enjoy the books she had once loved, even audiobooks which came on devices with too many buttons. Using the Raspberry Pi Micha was able to create a one-click audio player, and now his grandmother-in-law’s books are just a button away.

After a boy had returned to a bedroom messed up by his younger brother too many times he sought his father’s advice. The father-son team concocted a plan to build this room alarm system using the Raspberry Pi – a solution that proved very effective.

A father and daughter decided to harness the power Raspberry Pi to help put together a school project. The pair put together a “state board” which both lit up and made sounds at the press of a button. Not only did the 2nd grader design the poster, she also learnt how to solder and program in order to make it.

Raspberry Pi has even been helping people play the piano. Shane Snipe and his father put together this handy system of lasers to help beginners learn to play chords more easily.

Hackers at the Defcon hacker conference used Raspberry Pi to power a briefcase that converted loose change into Bitcoins. The intention of the briefcase wasn’t to make money; rather it was about influencing people to think about the Bitcoin as a currency. 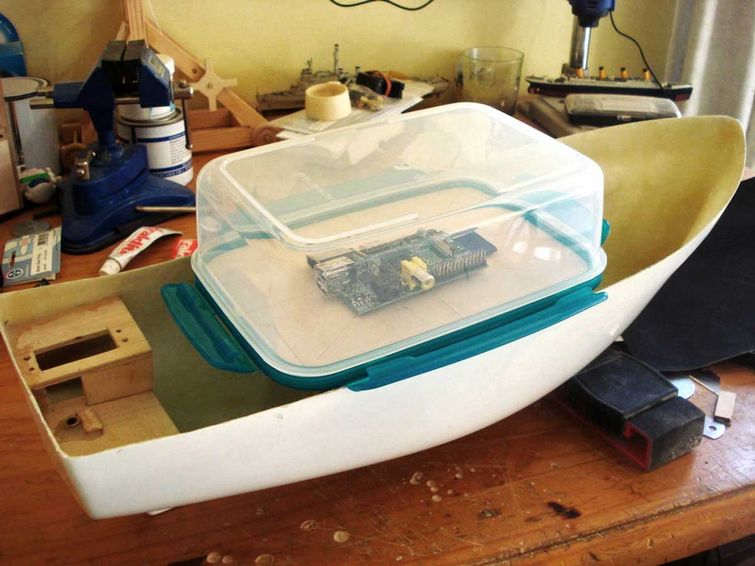 FishPi began as a dream to do something out of the ordinary with Raspberr yPi. The project, which is still under development, is to build an unmanned surface vessel able to cross the Atlantic unaided. On its voyage, FishPi will also to take scientific measurements which it will send back via satellite communication.

Shota Ishiwatari, an established Japanese inventor, has used Kickstater to fund an exceptional Raspberry Pi project, Rapiro. This little robot is not just adorable, it can also be controlled by voice or mobile device can will notify you of upcoming events and social-media notifications, bring you objects from around the house, and tell you what he can see using a camera in his head.

Dave Akerman almost sent Raspberry Pi into space when he attached the computer to a high altitude balloon. By attaching a webcam to the USB port he was even able to send live images back down to Earth!

Certainly more weird than wonderful, you could even say this project enters the creepy category. Artist Daniel Jay Bertner hooked Raspberry Pi up to a street camera to take photos of unsuspecting passers-by as part of his “Chicago Faces”. The guerrilla art project then automatically uploads these pictures onto a twitter account to highlight the blurry legal boundaries between non-consensual photography and distribution. Beware – Bertner is looking to branch out into cities other than Chicago.

Inspired by fairground fortune-telling machines Nick Johnson used Raspberry Pi to create his own advice-dispensing machine. Housed in a laser-cut case, and connected to a screen, coin operator, and printer, this advice dispenser prints profound messages for a little cash (and the more you offer the more profound the advice gets).

Scott Garner has created perhaps the oddest instrument known to man, the BeetBox. Using six beets connected to capacitive touch sensors to play the drum beats samples on a Raspberry Pi all the user has to do is touch a beet to hear a beat.

To begin your own innovative project please visit the Raspberry Pi website.

Learn why Raspberry Pi can be as vital to the UK as the Spectrum or BBC Micro in this article from Tech Radar.